Spend an hour on a dropzone and you will most likely hear the term “freefly”. You might see a group of freefliers looking cool in their tight-fitting neon jumpsuits, standing in the boarding area holding hands and spinning around – almost looking as if they’re dancing, preparing for their next skydive. What they are doing is called “dirt diving” (other skydiving disciplines do it too), and it means they are walking through the plan for their jump so that they are all on the same page. If you’re new to the scene, you’re probably wondering: what is freeflying?

There are two primary stages during a skydive: the freefall part and the parachute part. Within these stages, there are several different skydiving disciplines. Some of the most popular freefall disciplines are formation skydiving, freeflying, angle flying, and wingsuit flying (AKA wingsuiting): 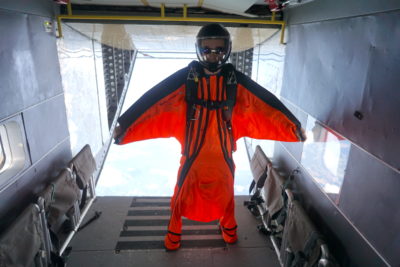 The Fast and the Fun

Freeflying and belly flying are both disciplines of skydiving where you fall straight down, as opposed to moving around the sky – except freeflying is a whole lot faster.

Whereas freefall speeds for belly flying range from 120 mph to 140 mph, the speed at which you fall when freeflying ranges from 150 mph to 170 mph. The reason that freeflying is so much faster than belly flying is that the mass of a person remains the same, but the surface area being presented when falling is much smaller vertically as opposed to horizontally. With the increased speed, little movements have a bigger impact, and everything happens much more quickly.


Falling in Love with Freeflying

One of the beautiful things about freeflying is that there is so much freedom of movement. It includes any type of body flight that isn’t falling straight down belly-to-earth, but the two most common freeflying positions are “head up” and “head down”. Head up includes “sit” flying which is a similar body position to sitting in a chair, and “stand” which is when you are falling while standing straight. Head down means you’re upside down as if you’re doing a handstand, except your hands are near your hips.

Freeflying can be loose and improvised without a plan, which means that friends fall vertically in proximity to each other, flipping, turning, and docking (touching or holding the other person), or whatever they decide to do during freefall. Freefly jumps can also be organized, meaning jumpers plan what they want to do ahead of time, talk about it, physically walk through the plan on the ground, and then try to execute that plan in the sky. There is competitive freeflying too, which is strictly planned, practiced, and scored.

How Do I Start Freeflying?

To begin freeflying, you need to be a licensed skydiver (not a tandem student) and have gear suitable for the orientations and velocity which accompany freeflying, including an appropriate parachute container and jumpsuit.

Freeflying is typically not for beginners, and you should have at least an intermediate level of understanding of body movement, belly skills, and skydiving safety before adding extra speed and a more unstable orientation. It is common when learning to freefly to think that you’re falling straight down, but to actually be moving horizontally across the sky. Without awareness, this can be dangerous because you could potentially move beneath a different group of skydivers. How you are moving relative to others in the sky is critically important, which is one of the reasons why you should jump with an experienced freeflyer (preferably a coach) when learning to freefly. Getting coached in a wind tunnel, aka indoor skydiving, is a great way to quickly and safely learn how to freefly without needing to worry about anything other than learning to fly (and it’s super fun).

Want to start freeflying? You can! If you’re new to skydiving, you can start by learning the basics of skydiving through the Skydive Monroe Accelerated Freefall Training. If you’re already a licensed skydiver and want to work on your skills, come jump with us and check out our awesome community!