Jumping out of a plane is really exciting, but there is usually some of anxiety that comes with the prospect of it. You can’t help but wonder: just how safe is tandem skydiving?

People tend to think of skydivers as an insane group of adrenaline junkies, but skydivers tend to be extremely safety-conscious and are mandated to follow a whole lot of rules and regulations. Are there risks involved? Absolutely, which is why we take every precaution to mitigate those risks as much as possible. There are many different factors that can impact the safety of our sport – let’s get into it.

Skydiving gear has come a long way in the past few decades thanks to advancements in technology, improved equipment, and superior training programs. There are strict rules and procedures for manufacturing and maintaining skydiving equipment, and modern gear is engineered with sophisticated safety features. Every tandem parachute system includes a primary parachute called a “main”, a backup parachute called a “reserve” (packed by an FAA-certified rigger every 180 days, regardless if it’s been used), and a little computer called an AAD (Automatic Activation Device) that releases the reserve parachute if the main is not deployed by a predetermined altitude. 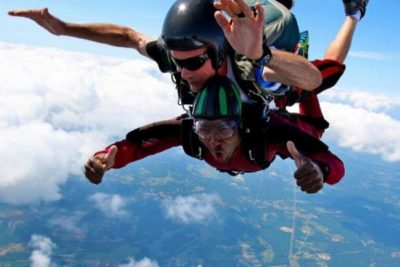 Have you been asked by well-meaning others, How safe is skydiving with an instructor?, and in turn found yourself wondering about their training? You’ve come to the right place! In addition to other requirements, tandem instructors need to have made at least 500 skydives, have been in the sport at least three years, and have passed an intensive skydiving instructor course.

Strapped to a tandem instructor, you are essentially along for the ride. While you do have some responsibilities, like arching during freefall and lifting your legs on landing, your instructor will lead you through every step of the skydive, making sure the gear is good to go and the rules are followed. Being at the mercy of a stranger might be scary to some, but certified and experienced instructors, like ours, take safety (and fun!) extremely seriously.

There are, of course, inherent risks to skydiving – it’s all about calculated risk. Neither tandem skydiving nor solo flying is without risk, and the reward for completing a skydive is very high. At the end of the day, taking the plunge is a personal decision that everyone must make for themselves.

Some are surprised to learn that the vast majority of skydiving incidents are due to human error – not equipment malfunction. As is the case with any extreme sport, there is a spectrum of safety. Tandem skydives are highly regulated, so instructors adhere to specific techniques, like keeping to a belly-to-earth orientation, deploying the parachute at a higher altitude than licensed skydivers, and using a large, lightly loaded parachute for a slower landing.

In contrast, licensed skydivers have freedom to do as they choose during their skydive (as long as their license level allows them to), and – because they are human – some attempt to pull off maneuvers above their skill level or to push the limits of their abilities. 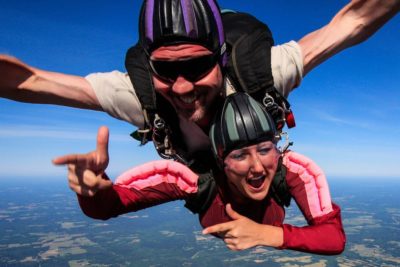 How safe is it to skydive? Let’s do the numbers.

Most non-skydivers  think of skydiving as extremely high-risk, but the reality is that skydiving is actually statistically safer than a lot of things you encounter regularly.

The United States Parachute Association (USPA) keeps track of injuries and fatalities in the sport of skydiving, so we are able to see how safe skydiving is compared to some everyday activities.

Now that you can confidently answer the question How safe is skydiving? for yourself – it’s time to take to the sky and soar! Ready? Come jump with us!