The skydiving history timeline is interesting, to say the least … and, well, actually a bit debatable. Does a skydive count if it’s from a steady platform? Or is that more like a BASE jump? There’s a different vernacular now, but for the sake of time, we’ll refer to skydiving as a person jumping from an elevated surface high enough to use a parachute attached to them.

Much like who made the first documented and certifiable parachute jump, this question of who invented skydiving is also up for debate.

Sketches that depicted something resembling a parachute were first made by the Chinese a long time ago … sometime around the 1100s. It isn’t altogether clear if their sketched canopies were ever actually used and tested, but we do credit them for being the first to think of (or at least document) the idea of human flight.

After this, Leonardo DaVinci became known for drawing a spherical parachute in 1495. And Andre-Jacques Garnerin came along three centuries later in 1797, and jumped from only 2,000 feet out of a small basket hanging by a balloon! For reference, we typically jump from 14,000 feet! 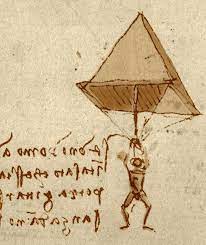 Our boy DaVinci comes out with his conical parachute design, which will later contribute to the ‘round canopy’ used in the military.

Fun fact: Jeanne-Geneviève Labrosse saw Garnerin’s impressive leap, and a year later became his wife! She became the first woman to pilot a balloon, and in 1799 the first female to jump, upping her husband by 1,000 feet and jumping from 3,000 feet.

Grant Morten or Albert Berry; one of these fine gentlemen is the first coined modern-day skydiver and leapt from a moving airplane.

The ripcord, developed to enable freefall, is created by Leslie Irvin and Floyd Smith. Talk about game changers! 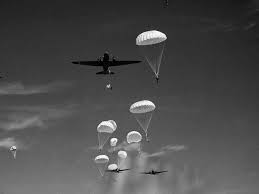 The United States prioritizes the strategic use of parachutes in WWII.

The United States Parachute Association (USPA) is established in Mineola, NY. First called the National Parachute Jumpers-Riggers, then in 1957 renamed the Parachute Club of America, and finally in 1967 the USPA. In 1946 the USPA served about 100 members, today there are over 40,000 … whoa!

The 3rd World Parachuting Championships takes place in Moscow, Russia. This is the first time the USA competes (we were a bit late to the game)!

Jacques Istel designs the first non-military parachute; called a ‘sport parachute.’ Note: This canopy was made with zero-porosity (ZP) material. More porous canopies are made with F111 fabric.

First flight in a vertical wind tunnel (shoutout to the great state of Ohio)! Basically: the wind tunnel simulates the freefall portion of a skydive. Along with the up-and-coming sport of indoor tunnel flying, wind tunnels allow for skydivers to practice without having to think about the other important components of a jump (landing, exit, canopy, etc.).

Skydivers jumping in organized groups, as opposed to strictly solo, is on the up and up.

Bill Booth invents the 3-ring system. In layman’s terms, this system is used as the attachment point between the parachute and the backpack that carries it (container). This allows for extremely quick and efficient release of the primary parachute if it’s deemed un-landable. (This one is super significant.) 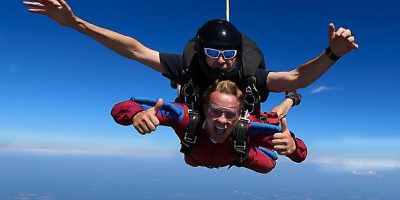 Who invented tandem skydiving? Ted Strong did—what a legend! His invention allowed the sport to expand exponentially and invited the general public to experience the freedom of flight.

The first AAD was invented. An AAD (automatic activation device) is a small computer that acts as a tripwire in the event that the jumper cuts away their main canopy, but cannot get to their reserve release. Essentially, it is designed to “pull your reserve for you” (note: skydivers only rely on this as a back-up; never 100%).

Fast forward 30+ years and the sport of skydiving is popular across the globe among first-timers, fun jumpers, competitors, and career professionals. Every year, licensed skydivers make more than 3.5 million jumps in the US alone! Innovations in skydiving technology and training strategies have made the sport safer than ever (2021 was the safest year on record), and all facets of the sport continue to evolve.

A huge difference we see today is the average age of skydivers. In the 70s skydivers were on the younger side, typically between 20 and 30 years old. Today, you’ll find a broad mix of ages at the dropzone, from baby birds who are freshly 18 to those celebrating their 70th (or 80th, 90th, 100th!) time around the sun. We even have official groups – like Parachutists Over Phorty Society (POPs), Skydivers Over Sixty (SOS), Jumpers Over Seventy (JOS), Jumpers Over Eighty Society (JOES), and even a Jumpers Over Ninety Society (JONS)! With skydiving, age is just a number, and with time in the sport comes great wisdom. The skydiving community values every member.

Ready to join our tribe? Book your tandem jump today! Let’s get those knees in the breeze and make history!