There’s a secret side to every sport: a set of practices only those intimately involved with the activity are privy to. These rituals and traditions are kept under lock and key; unless someone decides to spill the beans. While others might try to keep the information locked away, that’s not the route we skydivers take. You see, skydiving culture is one centered on fun and, as such, we want to share all we can! (That way maybe we can get you involved in our shenanigans!)

While you might not know it, the skydiving culture is actually quite rich. Although we’ve come a long way from the early days, certain traditions have held on. Here’s a peek into our world.

Skydiving culture is an inclusive one. At every dropzone, you’ll see that skydivers come in many shapes, sizes, colors, and abilities, and aside from loving to jump from airplanes, they all have one thing in common: they like to have a good time!

Skydivers understand that life is meant to be lived. This is why the majority try not to take themselves too seriously. Yes, safety is taken very seriously, but we do not take ourselves seriously. You won’t find most of us filling a “too cool for school” stereotype. Rather, we’re a little on the goofy side. 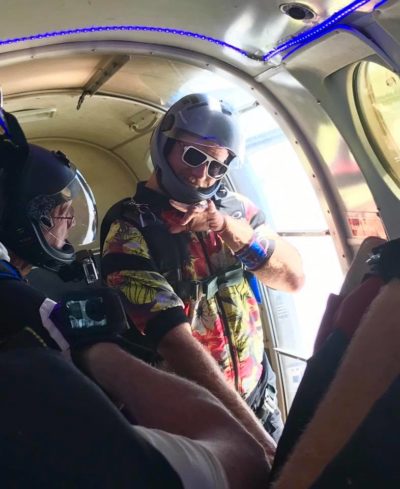 It’s for this very reason we think up so many fun and humorous things to do while skydiving. From freefall “fights” with pool noodles and riding inflatables out of specialty aircraft to taking turns flying through hula hoops and attempting to complete a Mr. Potato Head while falling 120 mph toward the ground – there’s no end in sight to our creative, kooky exploits.

Learning to skydive isn’t easy. You work tirelessly to develop freefall skills, accrue at least 25 skydives, learn to pack a parachute, and pass oral and written exams – making receiving a United States Parachute Association A License stamp the crowning achievement of a skydiving student. But we don’t just stamp the proper paperwork. No! A newly licensed skydiver is also quite literally “crowned” with a forehead stamp of the A license. It’s a signature experience that highlights this special member of the skydiving community for the whole day – or at least until the ink washes off!

Some jumpers mark their one-hundredth skydive with a celebratory “undie one hundie.” This 100th skydive tradition is when you and your friends skydive outfitted only in your skivvies! The more risque in our community have even been known to strip it all off and jump in the nude!

Fun fact: There’s even a society centered around naked skydiving exploits: SANS (The Society for the Advancement of Naked Skydiving).

For some celebrations there is cake, for skydiving celebrations there’s a pie (to the face!). Getting pied can actually occur at hundred jump increments – so, even if you were pied for your 100th skydive, you could sport another delectable dessert at jump 200, 300, 400, or even 1000! The idea is to keep the pie a surprise. Generally, the individual who just made the landmark jump will come strolling into the hangar while those around feign ignorance about the jump’s significance. Then, sneaky as can be, someone approaches and smoosh, there’s someone wearing a full face of whipped cream!

Before exiting the aircraft, each jumper will typically give a pre-exit handshake to those around them. Of course, a stiff shake simply won’t do, so most skydivers have developed specific pre-jump handshakes for their friends. Even tandem students can expect at least a little slap and dap before they take flight. The pre-exit skydiving handshake is a great way to show love to all those who’ve chosen this adventure.

As ubiquitous as Cracker Jack at baseball games is the skydiver and a healthy infatuation with beer (enjoyed responsibly, of age, and after jump operations are over). One such example of this is the communal beer fridge at many dropzones. At the end of a great day of skydiving, most jumpers will grab a cold one, sit down, and recap the day’s adventures.

So, how does the communal beer fridge end up stocked with beer? While the majority of the time people bring beer to celebrate achieving their license, reaching a milestone jump, or completing a novel skydive, sometimes the beer fridge is filled by the one who trips the “beer line”.

The beer line is, typically, an invisible line that delineates the approved landing area from the no-go zone. Licensed skydivers are well aware of where this line is and, might we add, are quite capable of avoiding crossing over into potentially unsafe landing territory. On occasion, though, a licensed skydiver will lose a bit of directional awareness or underestimate their glide ratio across the ground. And once they do, even if by only a toe, you’ll hear a chorus of “BEER” echo from other licensed spectators. This is because skydiving tradition holds that if you pass the beer line, you owe everyone on the dropzone a beer after the last load has landed! It’s a little teasing in good taste – but, if you cross the beer line you better bring the good stuff!

Want to take part in all the fun skydiving tradition action? Well, it all starts with one jump. Schedule your first skydive with Skydive Monroe today!