We’ve all had those moments back in our school days – you know, the “I’m never going to need this” mindset? For some, these thoughts struck in math class; for others, it was during science. Turns out, a whole lot of that math and science stuff is useful for understanding the science of skydiving.

We won’t bog you down with too much detail because, well, blue skies are calling. But some high-level info on the physics of skydiving is important to understand because it will make you a better skydiver and help you appreciate the magic you pull off with every jump!

The Physics of The Skydiving Freefall

Let’s start at the top with the holy grail we all seek: freefall. Freefall offers, on average, a glorious minute of good-good physics. Immediately upon exiting, gravity will start calling you back down to terra firma while the wind resistance that’ll meet you from below will keep you sky-high.

As freefall progresses and your rate of fall increases, both forces will become stronger … until they become equal. This is called terminal velocity. From here you will continue falling at the same rate – you won’t go any faster or slower. Typically, skydivers fall at a rate of 120 mph once terminal velocity is achieved. Terminal velocity is one of the factors that keep you from feeling like you’re falling. Instead, you feel like you’re floating – because you kinda are! 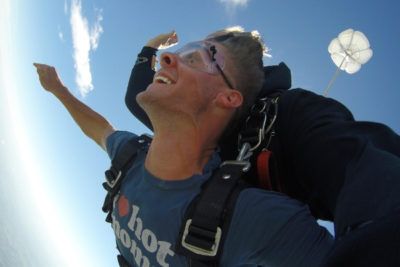 Two easy-to-control factors affect your rate of terminal velocity, allowing you to change how much drag you create. Mass (size and weight) will affect the speed at which you’ll fall. More mass makes for a faster fall. Fun fact – some skydivers wear weights in order to increase their fall rate.

Body positioning will affect your speed, big time. The skydiving arch – the characteristic belly-to-earth position for tandem students and beginning solo flyers – allows you to create a significant surface area, giving air friction plenty to push against. Moving your arms and legs affects your fall rate and direction. Bring them closer to your body, you’ll fall faster; spread them apart and you’ll slow down. Put one arm into the wind and you’ll turn; push down with your legs and you’ll go forward.

More advanced flyers enjoy playing around with different body positions, all of which influence drag. Head down flyers, for example – whose heads are pointed to the earth and legs are to the sky – won’t reach terminal velocity until between 150 and 180 mph.

The Physics of Canopy Flight

The fascinating physics of skydiving continues into the five or six-minute canopy flight portion of the jump. Parachute design is nothing short of amazing. With the help of fabric and string, we can jump out of a plane from thousands of feet in the air, fly around the sky, and then land on solid ground – and then pack it all back up and do it again!

When the parachute is deployed, your surface area dramatically increases, causing the wind resistance to overtake the force of gravity, and causing you to slow way down. The average modern, rectangular parachute descends at a rate of 17 mph with a glide ratio of 1:1 – meaning for every meter you advance forward, you descend by one meter – which results in flight at a 45-degree angle. Smaller, sportier parachutes worn by more advanced skydivers fly much faster.

Parachutes originally flown by the military were round and supremely difficult to steer. The rectangular parachutes of today are easily manipulated and can be steered with incredible precision. Toggles, that lead to brake lines, are held in each hand. When pulled, they change the shape of the canopy – and therefore change the effect of gravity and wind resistance. Pull one to turn; pull both to slow down.

It all makes sense, right? Maybe physics class would’ve been easier to understand if we’d talked about the nuances in skydiving terms!

Ready to put your physics of skydiving knowledge to the test? Come jump with us! Blue skies, y’all!