How can a strange contraption of nylon and strings be used to guide skydivers safely back to the sturdy ground below? It is undeniable that there is a magical stillness, a certain peace, that one feels seeing a person suspended beneath a bright inflated billowing bunch of fabric. It seems impossible, but, trust us, the impossible is entirely possible! So, how do skydiving parachutes actually work?

Both the main and reserve parachute are made from a series of small squares of ripstop nylon. This particular pattern contributes to the parachute’s structural stability. Additionally, the nylon used in parachutes has been chemically treated to minimize porosity and increase air resistance.

How Does a Parachute Open?

The main parachute is a ram-air canopy with a series of connected “tubes”. Each tube is open at the front and sewn closed at the back. As each cell inflates with air, the parachute forms a semi-rigid rectangular wing. 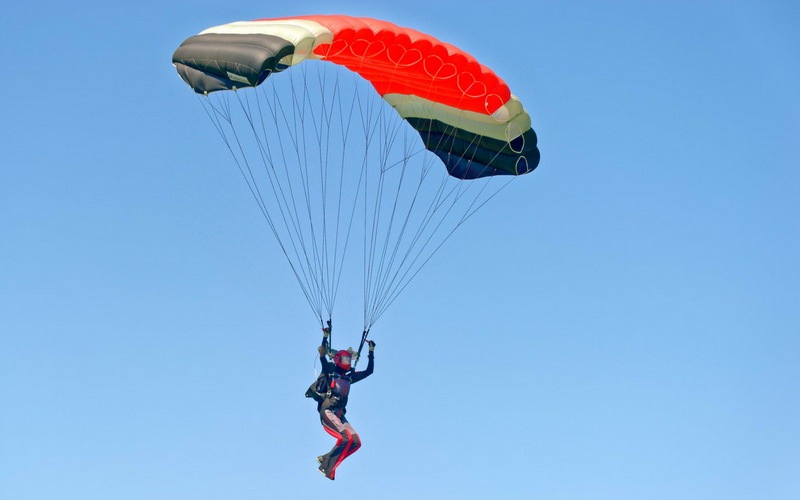 A Parachute To Fit Every Occasion!

Parachutes are incredible engineering marvels developed with reliability and performance in mind. Many are unaware that parachutes aren’t all the same. In fact, parachute manufacturers have spent extensive amounts of time developing parachutes for specific purposes (aside from delivering the jumper safely to the ground). There are zippy parachutes built specifically for speed. Other parachutes are large and docile, developed for student jumpers or exhibition jumps into stadiums and events. Despite the differences in designs, parachute physics remains pretty much the same.

Want to compare what you’ve learned to the real thing? See how a parachute opens first hand with a tandem skydive at Skydive Monroe!