You know, of course, that skydivers use parachutes, and that they deploy them at some point between the time they exit the plane and touch down on the ground, but do you know what happens in between? A whole lot! They’re falling past the clouds at 120 mph with no one to tell them when is the correct time to pull… so that leads to a lot of questions like when to open parachutes and how to know the altitudes! Here, we’ll tell you everything you need to know about when to deploy the parachute.

What Happens During Parachute Deployment?

If you’re going on a tandem skydive (strapped to an instructor), then your instructor will take care of everything, but it’s still fun to know what’s happening. If you’re doing the AFF program (student progression) or if you’re a licensed jumper (experienced skydiver) then you pull your own parachute.

On modern parachutes, parachute deployment begins by reaching back to pull a handle that is actually directly connected to a tiny parachute. The tiny parachute is called a pilot chute on student and experienced skydive gear, and referred to as a drogue on tandem skydive gear, but they do basically the same thing.

When to Deploy Parachute

Additionally, some people pull higher or lower depending on the type of parachute that they’re using or the discipline of skydive that they’re doing. For instance, on large group formation skydives where there are many people in close proximity to each other, skydivers will stagger their parachute opening altitudes to make sure that there is adequate horizontal separation.

The Lowest Altitude You Can Pull

What is the lowest altitude to open a parachute largely depends on your experience. Minimum opening altitudes for the students and different licensed skydivers are basic safety requirements (BSR) determined by the United States Parachute Association (USPA), which is an organization that plays a significant role in the regulations associated with skydiving.

The minimum opening altitude is the lowest altitude by which your parachute container should be opened. This is usually seconds after you pull your pilot chute, but people often pull above this recommended minimum. The minimum container altitudes for skydivers are:

How Do You Know the Altitude? 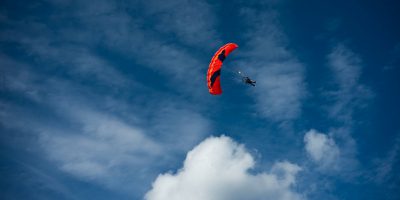 It’s important to be altitude aware and know when you should be pulling your parachute, but how do you know what altitude you’re at when in freefall? There are a couple of methods we use to know when the right time to pull is, but the primary tool is an altimeter. An altimeter is an instrument that tells your current altitude (height above the ground). You’ll often see an altimeter strapped to a skydiver’s hand or wrist, although they are sometimes worn on the chest. Both analog and digital altimeters are popular among skydivers.

An analog altimeter has the appearance of a clock face, numbered from 0 to 12,000 ft, with a yellow area that indicates the deployment altitude range and a red zone that shows that you are getting close to the ground. A digital altimeter displays the altitude as a graphic number on a little screen, and can often record data about your jump.

Altimeters are essential for a skydive, and there’s a device that can be used in addition to an altimeter called an audible altimeter. The audible altimeter, also known as a dytter, is programmed prior to skydiving and worn inside a skydiving helmet. It makes a loud beep when passing through the preset altitudes. Dytters are super helpful because they will alert you of important altitudes if you get distracted, and are a great backup to visual altimeters.

As we’re falling through the sky, we need to know when to deploy the parachute – and, thankfully, like most other aspects of skydiving, we’ve got it down to a science! Come get sky high with us – book your tandem today!