Hollywood and old-school ideas of military jumpers crashing in have left a mark on everyone’s brain that parachute landings are a cruel necessity of skydiving. However, nothing can be further from the truth. The advancement of training and equipment has come such a long way that sport skydiving landings can be tip-toe soft.

First, let’s define a parachute landing: A skydive consists of several parts including exit, freefall, landing. The parachute landing is after freefall when the parachute has been deployed and about 10-15 feet above the ground for the final approach to touchdown.

So what’s there to know about a skydiving landing? Let’s explore!

Tandem parachute landings differ from sport parachute landings because on a tandem jump the student is harnessed directly in front of the instructor. Landing a parachute is a very technical part of the skydive that requires training and experience. Because of the forward momentum of the canopy, and the optical illusion of coming in faster than you are, it is common that tandem students want to reach their feet down to feel safe back on the earth.

Therefore, tandem instructors will have tandem passengers lift their legs for landing. Every instructor has their own technique they prefer their students to perform; however, the basics are to slightly bend your knees towards your chest with your toes upwards. Yes, every first-time skydiver wants to touch down standing up, but because of having 4 legs to contend with on landing, wind conditions, and other factors, a butt slide is the preferred landing method.

When you embark on learning how to solo skydive, you are taught the basics of canopy flight and landings. As we’ve stated, the parachute landing technique is challenging to learn as there’s nothing else relatable or a way to practice, other than learning the methodology, visualizing, and actually doing it.

Because of all the variables encountered, students are taught how to do a Parachute Landing Fall (PLF). This is a time-tested technique for minimizing the impact of an abnormal landing. Unlike a tandem landing, a PLF is touching down on the balls of your feet, side of the calf, then rolling onto the outer thigh and to the other side of your back.

Every student masters the parachute landing at their own pace. The best way to learn is by practicing it, visualizing, and watching others.

Ok, have you ever seen a Canopy Piloting Competition (aka swoop)? That’s where experienced skydivers purposely swing the parachute around to create momentum, then flare it out right above the ground to literally swoop across the ground at high speeds! It’s absolutely phenomenal to watch these incredibly talented athletes!

A note of caution: High-performance canopy flight and landings are done by high experienced skydivers that have been specifically trained on this method of landing because of the extra risks involved. These canopy pilots can swoop across the ground approximately from 50 to 85mph! 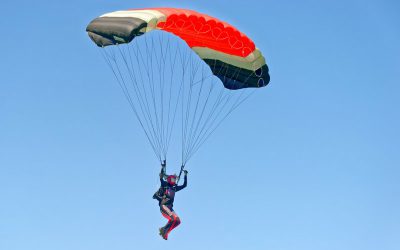 Student jumpers use the “school bus” or “station wagon” type of parachutes to learn the fundamentals of canopy flight and landing. As one gains parachute flying skills, different parachute designs and models are available to try. Not every experienced jumper wants to be a high-performance canopy pilot swooping across the ground. Some jumpers prefer a graceful descent and smooth parachute flying characteristic to get them to the ground.

There is a lot to understand before skydiving but if you are ready to get your jump on and experience parachute landings for yourself, then give us a click or call to book today!