Figuring out how to skydive was a wild ride for human beings. The desire to jump off high things predates the invention of airplanes by some distance, with questionably brave folks attempting to descend from balloons, bridges, buildings, and towers via parachute hundreds of years before the Wright brothers ever flew. As aircraft got bigger, better, and able to go higher – the more fun it seemed it would be to fling yourself out into the open sky, fall for a piece, and then safely deploy a parachute once near the ground.

What of the wind though? Those who first seriously considered the speed of a human body falling towards the earth felt that a person achieving terminal velocity would need to do so in a ball, lest the strength of the rushing air rip one’s arms and legs clean off! Following a few tries, this turned out to be exaggerated – and not only could a skydiver safely extend out their limbs but also the strength of the ‘relative wind’ could be manipulated to their advantage. 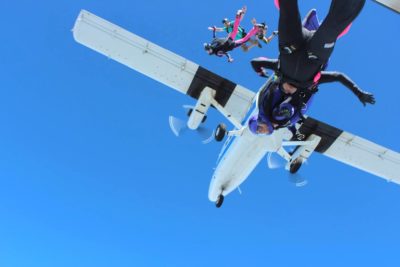 With practice, the power generated by falling through the air can be manipulated, granting skydivers the ability to move around in the sky. Over time, skydiving positions have become very advanced – with eager practitioners of the sport gradually learning how to fly in every way that can be imagined. Fancy flying takes a long time to master and a great deal of training, but the basics are relatively easy to understand and put to use.

A skydiving arch is the first shape you learn how to create with your body – whether you are solo skydiving or jumping in tandem with an instructor. The arch position is applied to create stability with your body by pushing your hips forward and your chin up. Arching in this way will keep your belly oriented towards the ground and your head looking out towards the horizon. This also means that the parachute on your back is pointing upwards at the sky – which is exactly where it needs to be.

The box position means what you probably imagine when you think about what skydiving looks like. This is also called a ‘boxman’ position, but also ‘flat flying’ or ‘belly flying’ just as often. A box position adds extra stability to your arch shape, plus the ability to deflect the wind from your outstretched arms and legs to create movement. The boxman is called this for its general boxiness and symmetry, making strong ‘corners’ for your body.

The delta position is another of the most important skydiving body positions that you need when learning to skydive solo. Skydiving is at its very best when doing it with your friends, but opening a parachute in close proximity to others is not done. At the end of a jump, the people involved all need to be in a clear patch of sky so they can safely deploy their canopy – so the delta position is applied (also called a ‘delta track’ or ‘tracking’) to generate forward motion. Ever seen an action movie where a skydiving hero sweeps their arms back to their sides, extends their legs, and zooms forward across the sky? This is tracking or delta position skydiving is – yet in the real world, it is a foundational skill rather than fancy spy stuff. 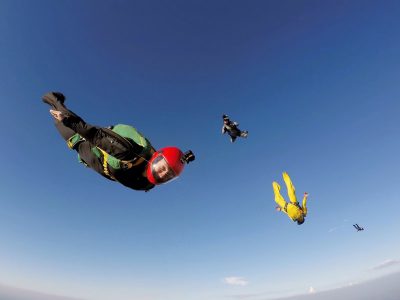 Skydiving body positions only get more interesting from here. Over time, and with a lot of trial and error, skydivers learn how to control their place in the sky with tremendous precision. Maneuverability has grown to the point that body flight is best considered as being closer to a dance or a martial art than anything else, and skydiving freestyle routines look like a combination of figure skating and breakdancing.

Everyone has access to this aerial playground, and all you need to do is jump. Ready? Let’s go!