Skydiving is neither inherently good nor bad for your back. Because there is a vast scope and scale when it comes to back pain, the effect of the skydiving experience on your back is highly individualized. Many people who suffer from back pain have successfully made a skydive. Although, consequently, there are those who have experienced back discomfort while skydiving. It’s important to note that skydiving with back problems has to be determined on a case-by-case basis.

Does Skydiving Hurt Your Back?

As an extreme sport, many assume that skydiving is hard on the body. Although there are risks associated with jumping from an aircraft in flight, improvements and training and technology have not only contributed to the safety of the sport but have also made the experience far more comfortable.

The skydiving experience consists of separate portions. We’ll elaborate on boarding and riding in the aircraft, freefall, the parachute deployment sequence, and landing to give you the information you need to determine if skydiving back problems are a likely outcome.

Skydiving aircraft can be a bit different than their commercial aviation counterparts. One noticeable difference is size. Compared to the size of aircraft you would board for a commercial flight, the aircraft used for skydiving is much smaller. That said, we consider ourselves lucky here at Skydive Monroe to fly a swift King Air with a 14-passenger capacity.

To board our aircraft, rather than walking aboard upright, you will need to climb up a small set of stairs and crouch to enter through the side door of the plane. Once aboard, passengers will sit facing the tail of the aircraft on bench seats. The seating is cozy but comfortable, and you won’t be aboard the plane for long: the King Air is one of the fastest jump ships in the industry with a 10-minute ride to altitude!

When it is time, you and your instructor will do a slide, shimmy, and shuffle to move your way toward the aircraft door. This will often require you to maintain a squatted/crouched position.

In order to ensure a stable freefall, you will need to be able to assume a position known as the skydiving arch. In this banana-shaped body position, your head, shoulders, and legs are lifted while your hips and pelvis are pushed forward and down. In a correct skydiving arch, the hips should be the lowest point. This position requires a moderate amount of flexibility. Although, generally it is not too hard on the back. While the position may be difficult to maintain on the ground, in freefall – because of the relative wind – it is much easier to hold. 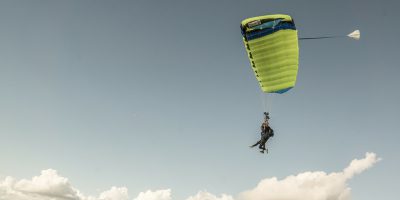 Parachutes have also been designed to reduce the impact of landing. RAM-Air parachutes can be steered and flared for landing. The flare changes the shape of the back of the parachute wing to convert downward speed into forward momentum, trading speed for lift.

On a tandem skydive landing, you will often slide in the landing on your bum, which will require you to lift your legs at about a 90-degree angle, with legs extended straight in front of you. Sometimes this will change depending on the wind conditions that day, so be sure to pay attention to your instructor and the pre-jump briefing so you’ll be prepared for landing.


Skydiving With Back Problems

Ultimately, though mitigated by advancements in technology, training, and instructor experience, skydiving does still carry some risks with it. The best course of action to avoid a back injury is to be sure to come prepared for your skydive, do a bit of stretching beforehand, and listen attentively during the pre-jump briefing and to any additional instructions your instructor may provide.

Feeling ready to jump? Schedule your skydive today! Or, if you have further questions or concerns, reach out! We’re happy to help. Blue skies!