Iowa-born Bruce Meinert is a force to be reckoned with.

He’s been jumping for 30 years, first of all–and, in all that time, has nailed a perfect safety record. The stats are downright amazing: He has been the instructor on over 3,000 tandem skydives and, in all those jumps, not one student has been injured. Not only does Bruce instruct tandem students, but he also trains new skydivers to earn their solo licenses in Skydive Monroe’s excellent AFF program. (And he’s a great sport skydiver in his own right, to boot.)

Bruce’s connection to Skydive Monroe started, quite literally, at the very first jump of his skydiving career. He made that jump at a dropzone south of Atlanta that no longer exists–but the current owner of Skydive Monroe was Bruce’s first jumpmaster. He had just moved from Iowa at the time, and skydiving joined a growing list of reasons for him to make his new home in the south. 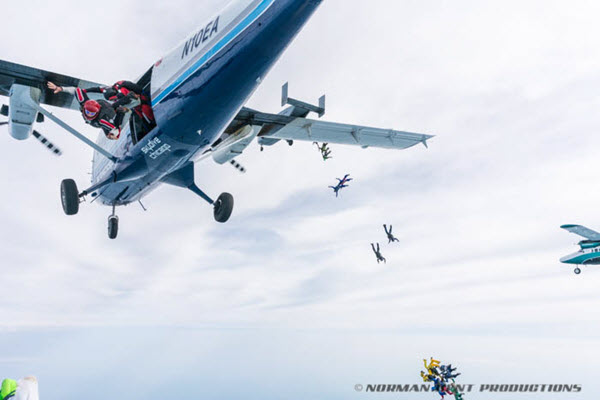 “It wasn’t that hard for me to move 900 miles away from family,” he laughs. “Okay, that’s not true. My brother moved down here about six months before I did, and it was the lack of work opportunities in the area that we lived up there in Iowa that truly brought me to Georgia. I didn’t work on a farm, and I didn’t work in a factory, so my choices were rather limited at the time. After living down here for a while, my brother would send me up his local job ads. I was just amazed at how many pages of job ads there were in Georgia versus in the area where I was living, so I packed up and went. And it wasn’t hard to move away from the Iowa winters. They are brutal. The last winter I was there–actually, at his going-away party–it was 30 below. I don’t miss that.”

Soon after making the move, Bruce found skilled work painting cars for a body shop. One day, a coworker walked around the shop asking people who wanted to make a skydive. The guy really had a bee in his bonnet for it, as he had just done four years in the US Air Force and had received ground training but never had never made any jumps while he was in the military. Bruce was intrigued. He threw his hat in.

“I let him make all the reservations,” Bruce remembers, “And we were supposed to go down on a Sunday morning to do the class. I was given options: Do you want to do a static line, tandem or AFF? None of these made any sense to me. But the gist I got out of it was if I was going to make a skydive, I wanted to get some freefall and not be ‘strapped to some dude.’ That was my mindset. At any rate, the guy who did all the reservations called me the night before and said he was sick and couldn’t go.”

Undeterred, Bruce went on his own. He did the class, made the jump, and hasn’t stopped jumping since. To Bruce’s knowledge, the other guy never did made a skydive. That was 29 years ago.

“I’ve been at it for a while,” Bruce laughs.

To date, Bruce has been a beloved fixture at Skydive Monroe for 17 years.

“We have always had a decent plane,” Bruce smiles. “We can get to altitude in 10 minutes. The owner is safety-oriented. We have got a solid safety record. The equipment is really nice. It’s really nice here, and I’m proud of it.” 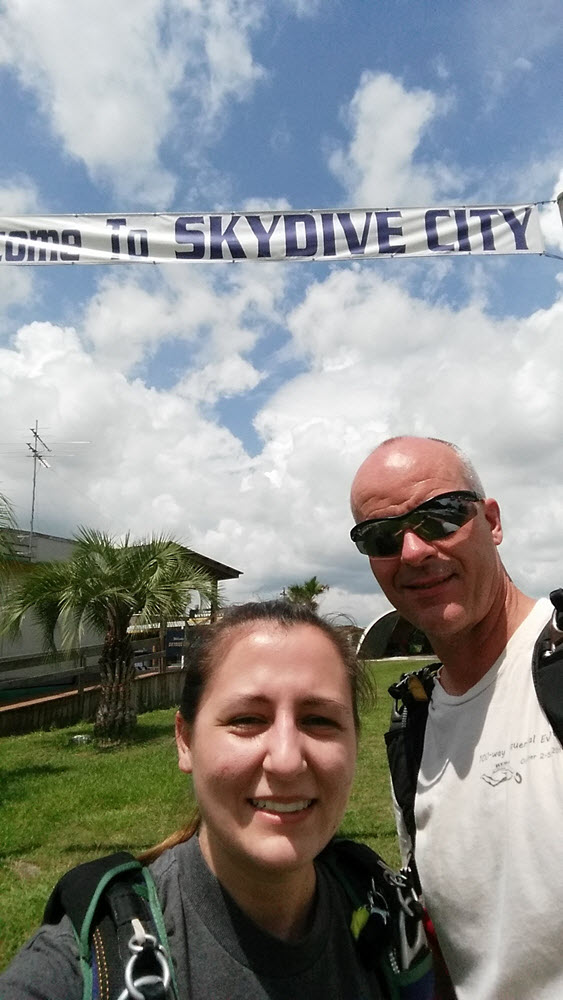 In three decades of skydiving here, there and everywhere, it’s no wonder that there are plenty that stand out in Bruce’s memory.

“I have three kids,” he says, “And my middle child–who is the oldest daughter–took up skydiving. It just so happens that I am a medium-build kind of guy, and she was tiny, so I was pretty much one of two instructors that could go with her. I taught her all the way through. I was her main instructor the entire time. Yes, I did fail her on a level just because she didn’t do what she was supposed to do. She was surprised that I did it, but I think she appreciated it as well. You don’t skate through life, especially something like this. It is kind of important to know the safety stuff.”

“The first time I released her was a big moment,” Bruce grins. “On her category C. The other instructor fell away, and I stayed with her. It was pretty amazing to see my kid skydiving. She has a few more than 100 jumps now.”

Bruce’s daughter is, by a very long shot, not his first student. In fact, he has been teaching AFF regularly since 1997. The philosophy of skydiving instruction that he has developed over those intense years of teaching is, quite literally, simple. He strives to make sure that he never overwhelms a student with unnecessary information.

“You have to keep it short and simple,” he says, “Because the first time we jump out of an airplane, it is overwhelming. It truly is. As an instructor, you have to break through that overwhelm in order to convey what you want to get across–and keep calm, no matter how well or poorly the student is doing. In my experience, the situation will pull through.”

These days, Bruce is proud to be a full-time painter and part-time skydiver. That balance is just the way he likes it.

“I’m very professional, but I never want skydiving to become a job,” he explains. “I think it would take some of the fun out of it if I felt I had to make a jump to support myself and my family. That’s why people burn out, get complacent and tired. The balance I’ve struck means that skydiving is my choice and my hobby, and I am very passionate about it. I have been for many years.”

As you might imagine, Bruce meets excited new jumpers every day who come to him with advice about their brand-new-and-blossoming skydiving careers. For these–and for you–Bruce is ready with a helpful word.

“First of all, set aside the time and the money you’ll need,” he insists, “Because you really need to put in the effort to try to be current. At the beginning, people don’t realize the importance of that. Just know that if you do a recurrency jump further on in your career, it is almost worse than if you do one earlier. And don’t downsize too fast. And remember to smile!”