Bill Scott has been an active skydiver for 37 years, but you’d never know it from his razor-sharp wit and charming, playful manner. Quick with a joke and a jack of all trades, Bill is a great guy who truly, madly, deeply loves the sport of skydiving. Because he’s at the heart of Skydive Monroe, it’s that passion that drives the dropzone–and puts a smile on the face of so many jumpers.

“I was a little kid when I first saw skydivers,” he remembers. “And then, in 1974 or ’75–when I was living in Louisville, Kentucky–a friend of mine came to me and said, hey, we saw these guys jump out of airplanes, do you want to go? A couple weeks later I went to Green County Parachute Center in Bardstown, Kentucky and made a jump. I’ve been all about it ever since.”

At the time, Bill was a broke college student. He made as many jumps as he could, living for the weekends when he could hand over what little discretionary income he had to the dropzone. As the years rolled by, his jumping became increasingly serious–and, eventually, professional. He earned all his ratings and became an instructor.

“I had a ‘real job,’ too,” he laughs. “I had a kid, so I had to make a living.” (The kid in question is now a professional skydiver, just like his dad. He works as a tandem instructor in Kentucky.)

Bill first worked as a construction consultant for a large management firm; then, he had his own remodeling business; then, he spent a couple of years as a manufacturer’s rep, traveling all over the country. Finally, in 1993, Bill decided to fulfill the dream he’d had since those very first jumps–and put his business acumen to use to open his very own dropzone. He found an amenable airfield in the Atlanta area and set up shop. The rest, as they say, is history. 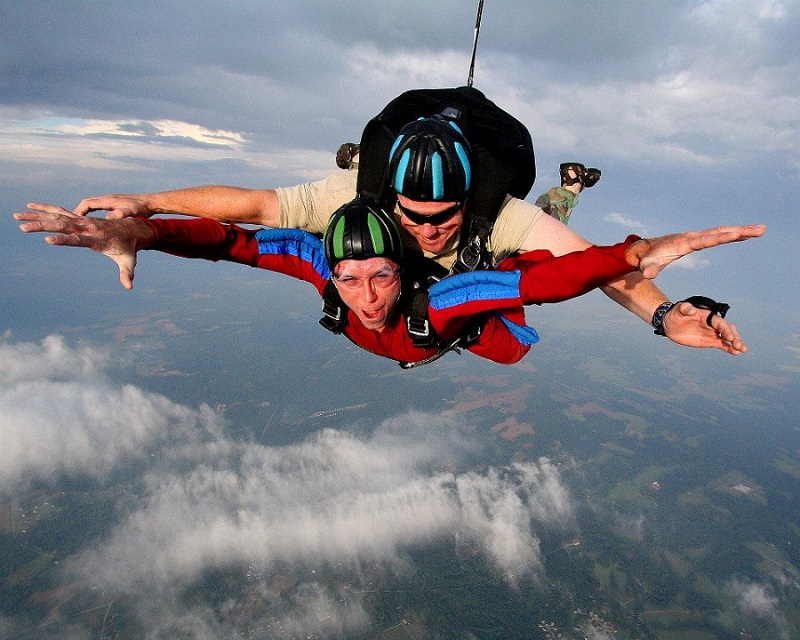 Over the years, Bill has proven himself a dedicated athlete. He has participated on 100-, 200- and 300-way records–a kind of skydiving open only to elite skydivers with high jump numbers.

“I love it,” Bill says. “Doing a record is great, but it also takes a lot of time. When I’m fun jumping, what I enjoy most is organizing jumpers–young and old, new and experienced alike. I love going up and teaching them something new, then debriefing afterwards and showing them how well they did. I love helping them dial it in. I’m a tandem instructor and a pilot, too, so I don’t get to coach as often as I’d like, but I really do love to do it.”

As much as Bill loves to jump, and after four decades of skydiving, he would tell you that he actually doesn’t get to jump enough. His days at the dropzone are occupied by all the other necessary aspects of running a dropzone: working with students, managing staff and making sure that every customer is having an experience of a lifetime.

“There’s a tongue-in-cheek kind of joke that dropzone owners like to tell,” Bill laughs, “that says I get to skydive for free.” He explains that owning a business is never really free. He doesn’t mind, though because the folks who surround him make the operation more than worth it.

“The people are my favorite part,” Bill insists. “Not just the first-jump students that come in or the fun jumpers or the spectators, but the staff. They make it worthwhile. They really do. Because they have a tremendous amount of fun, and they are as dedicated to the sport as I am. They make it a pleasure to come to work.”

“And they stick around,” he mentions. “A couple of my instructors have been with me for over 25 years. I taught them 25 years ago, and they’re still with me now. We jump together whenever we can. I listen to their comments, we get it all done and we enjoy each other’s company after hours. It’s nice to have those kind of people in my court.”

“I think they stick with me because they feel safe here,” Bill adds. “I press safety. Safety first. And I hold everybody to the same standard that I have. A lot of the jumpers–and especially my staff–likes the fact that I include them when I’m making decisions. For instance: Somebody will mention that the wind is picking up and we’ll go out together to discuss it; to find out how everybody feels.”

Between safety, on-point customer service and the warm, natural brand of southern hospitality that suffuses everything Bill does, it’s no wonder that Skydive Monroe has become the premier destination in Georgia for both brand-new tandem students and sport skydivers looking to advance their skills. Bill loves sharing the sky with each and every one of them.