Why can’t you listen to music while skydiving?

Safety is at the forefront of our minds on every single skydive, which is why listening to music falls into the big category of “what you should not do while skydiving.” Have you ever noticed people tend to turn the music down in their cars so they can think or even see better? Music (especially blaring to counteract the sound of the wind) can act as a huge distraction to the task at hand! For the same reason (and the fact that it is literally unachievable), you cannot use your phone while skydiving.

While many people think the role of a tandem student is to just be a malleable blob in front of their instructor, a tandem student is exactly what they’re called … a student! Tandem jumping is designed to be fun and wayyyy less demanding than a solo skydive, but it is still critical that the student be able to effectively communicate with their instructor in the plane, under canopy, and yes … in freefall! While it is totally possible to scream while skydiving – having a fluid conversation? Not so much. Can you talk in freefall? No, but an instructor may use hand signals or other motions to let a student know what’s going on (expect the universal sign of having a good time, a big thumbs up)!

Nope. The plane ride is a super important part of the skydive (obviously) … but we mean in terms of safety! While aircraft emergencies are extremely rare, they can happen, and in the event of one happening everyone needs to be attentive and able to take instruction from the pilot. Regardless, on every jump, the ride to altitude is a time to have a last-minute brief with your instructor as a tandem student, go over your dive flow if you’re a fun jumper, take some big deep breaths, and truly appreciate the moment. We promise, the few minutes before a jump (especially your first one) are truly special and to be cherished.

Wearing your headphones at the beginning of a skydive doesn’t mean that you’ll be landing with them. In fact, chances are they’ll fly away to the land of lost shoes and earrings, and they might smash into your instructor’s face while they’re at it – ouch!

When you skydive you’re going to be cooking at terminal velocity, which will be in the ballpark of 120 miles per hour. Ya know how when all the windows are rolled down while driving down the interstate going 75mph with the wind just thundering past? Basically, double that. To even slightly hear your music you would have to be absolutely blasting it, which definitely isn’t great for your ears!

If you’re asking “Can I wear AirPods while skydiving?” The answer is *technically* yes, if you earn your USPA skydiving license first. Earning your A license (the first of four skydiving licenses) means that you’re deemed safe to take care of yourself and be aware of others in the plane, sky, and on the ground. While licensed skydivers can technically listen to music when they jump, it’s not advised. Being focused on the skydive is critical to maintaining safety for yourself and the jumpers around you, if your focus is tainted because your jamming out the result could be detrimental. The risks of listening to music while skydiving generally just aren’t worth those few minutes of a jingle. 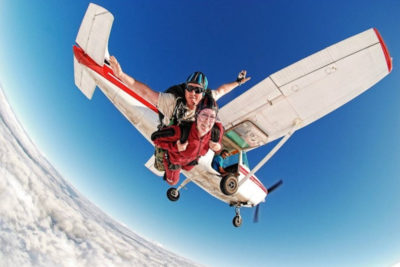 Your headspace is the most important space, so letting those music-induced endorphins freeflow on the ride to the dropzone is mandatory! According to experienced jumpers, here’s a list of the best pre-jump jams:

Don’t let the lack of tunes on your skydive deter you from booking your first jump! The rippling excitement in the plane, the sweet sound of the wind bellowing by, and the indescribable peacefulness of the canopy ride is more than satisfactory. Let us know if you have any questions or concerns!