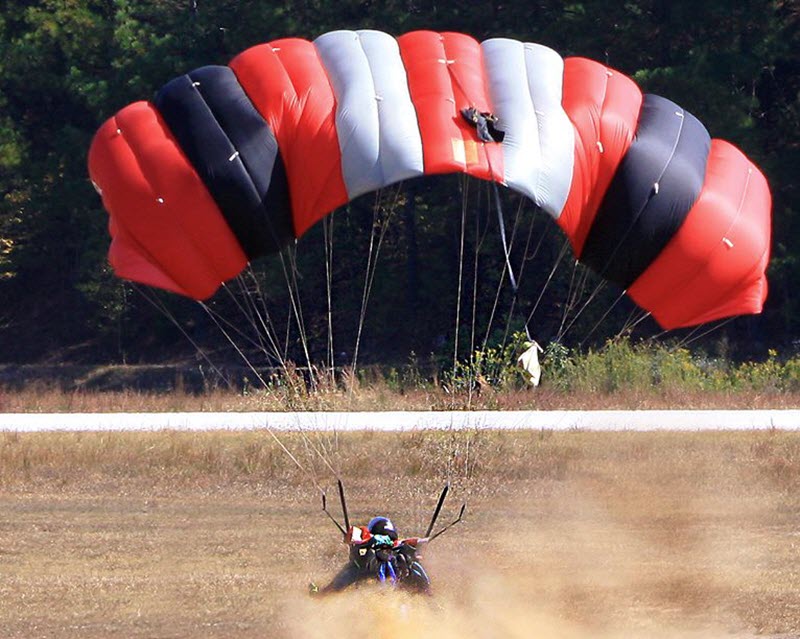 Back in old-school skydiving, with round parachutes, the packing process didn’t really have too much of an effect on how the parachute opened on deployment. As long as it was packed away and not tangled up, it was pretty much good to go.

That means the process of packing them is much more involved and has a much bigger effect on the way it deploys. While the packer can’t be held entirely responsible for the way the parachute comes out of its bag (after all, deployment usually happens while you’re falling 120mph through the air!), they can do things to give the chute the best chance possible of opening without issue.

The method for packing these parachutes is called PRO packing – PRO stands for ‘proper ram-air orientation’. That refers to the ‘ram-air’ design of the parachute, which means the chute has openings all along the front edge into which air is ‘rammed’ during flight, giving it its rigidity. When we ‘PRO’ pack, we are putting the parachute in the container in the correct orientation to fill with air as soon as it is released.

Hobby jumpers can choose to pack their own parachutes or pay the packers to do it for them. That choice will usually come down to time or their own desire to pack or not – often, people prefer to grab a drink and chill after their jump, so they’ll use a packer then.

Getting Serious About Skydiving Gear

Skydiving is fun. Heck, it’s the most fun thing you can do, if you ask us! But it’s also important that we take things like equipment management and care seriously. That’s why we have all these processes in place, not just for packing parachutes, but for skydiving equipment care in general.

That’s why we’d never recommend trying to teach yourself to pack or learn from YouTube videos. If you want to learn how to pack a parachute for skydiving, come and see one of the staff here at the drop zone or contact us to speak to a member of the team and we’ll be happy to help.